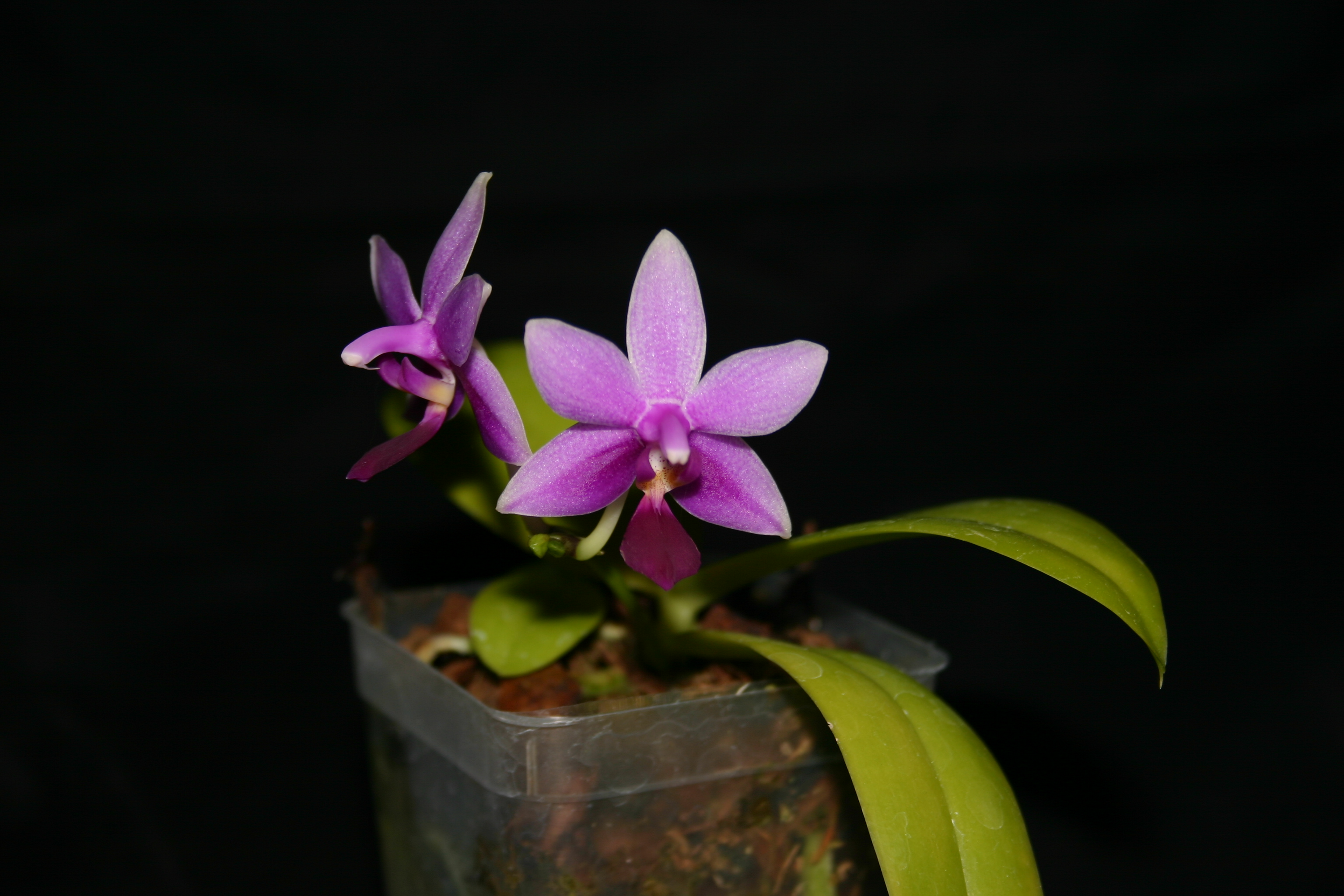 This article was originally written for the HybridizersForum.com. If you are interested in orchid breeding, then it is a great online community to participate in. Some of the information in this article is a rehash of some previous things I have talked about and some of this is I am presenting for the first time to the public. As I will state several times, please keep in mind some of this changes on a frequent basis.

Sometime around 2000-2001 I decided I wanted to focus on breeding blue Phalaenopsis. (I was also the ridiculous grower that had Masdevallias growing in East Texas back in the 90s, so this seemed like a similar challenge!) So I started trying to get my hands on everything that was even close to blue and started doing lots of research. I've tried to talk with as many people as were willing to share their thoughts on blue phal breeding as possible. As many of you have probably realized they are few and far between. My current breeding program is the result of my own research, discussions with other hybridizers and the resulting conclusions I've come too. So you're reading the results of about 6-7 years of thought and research into all of this.

For the purposes of discussion, I'm going to attempt to outline my current breeding goals and the planned breeding lines that I hope will help me accomplish them. This is an aggressive and multifaceted program. Keep in mind that I am 100% focused on blue breeding, so I can have a broader scope and be a little eclectic at the same time.

None of what I'm writing takes into consideration flower pH, blue contribution from different pigments, much less co-pigmentation. At this early stage I am not trying to take that into consideration other than just being aware that there are multiple processes at working giving us the blue pigmentation in different coerulea phals. However further down the line, some of the experimental crosses may begin to help us better understand the mechanisms at work. I expect that we will learn as much form the crosses that don't work as we will learn from the crosses that do work. As we begin to better grasp of the mechanisms at play my approach will become more focused.

Goals:
Create high quality blue Phalaenopsis with better form, vigor and saturation/hue than currently available hybrids. The end goal is to create large/standard solid blue phals and multiflora solid blue phals; both with great form, color and vigor. Both dark blues and light/baby blues are part of these goals.

Breeding Lines:
This is of course where it gets fun. I have five bigger picture areas of focus at this point. If I'm lucky I'm getting 10 of these crosses to take per year. So none of this is going particularly fast, but it should be noted that I have been able to complete 15 of planned coerulea Phalaenopsis crosses to date. Some of them are growing out in the greenhouse and some are currently in the lab.

a.) Phal. equestris var cyanochilus line breeding - currently in progress.
b.) Phal. violacea var indigo line breeding - the first crosses will hopefully take this year. Assuming they are successful, I'll start treating protocroms with colchicine. (The updated to this is we have two crosses in the lab at the replate stage using violacea 'Sapphire's Navy'. Both crosses were also treated with colchicine.)
c.) Line breed other coerulea phal species that may happen to come up.
d.) Dts. pulcherrima var coerulea - other growers are currently focusing on this. I'm not planning on doing an line breeding unless I just end up with two really good ones and can't help myself!

2.) Coerulea on Coerulea Crosses - Utilize existing coerulea phal hybrids where possible to breed for improved color and shape. A couple of these types of crosses that are in the works are:

a.) Dtps. Summer Rose (Kenneth Schubert x equestris) I've got this growing out in the greenhouse and still in the lab using the equestris var cyanochilus.
b.) Phal. Equalacea (equestris x violacea) I've got two of these in the lab with both forms of coerulea violacea on the equestris var cyanochilus.
c.) Dtps. Purple Martin (Kenneth Schubert x violacea) As previously mentioned I have this in the lab made with the indigo violacea.
d.) Dtps Kenneth Schubert (violacea x pulcherrima) This will need to be remade in the near future using the indigo violacea. I tried to get it to take several times last year and had no luck. I'll keep trying.
e.) Dtps. Purple Gem (pulcherrima x equestris) I've been trying to get this take with the cyanochilus for several years now. One of these days I'll get this one done.
f.) Dtps Siam Treasure crosses. I've been trying these for a few years. I have one seedling in flask of Siam Treasure x equestris var cyanochilus. Other than that I've had zero luck with this direction. If you've seen my Siam Treasure 'Blue' in its full glory, then you know why I keep trying to get this thing to breed.

3.) Leverage other phal species that appear to carry color well - I've done a great deal of research on this and have been trying to follow SE Asia breeding trends as well. Phal. micholitzii shows up in their blue breeding very frequently. Phal. tetraspis to a lesser amount. I've had a hunch for a very long time that tetrapsis would carry blue well. This was partially confirmed when Tzu Chiang Lilac was created. I've also seen some Jennifer Palermo's that were almost blue. I've got a Jennifer Palermo in flask now using a regular coerulea violacea. I'm trying to do that cross with indigo violacea.

I have been trying to get crosses in place along this line since 2000. I now have a number of different crosses both in the lab and now in the greenhouse using different blues and tetraspis. The first of those should start blooming next year. I'm also planning on using Tzu Chiang Tetralitz as it does have better shape than tetraspis alone and has been proven to carry blue. Phal Penang Jewel (Penang Violacea x violacea) also appears to carry blue and I'm hoping to remake that cross using an indigo violacea in the near future that can then be used in further breeding. The information I've been able to get so far is that the current coerulea crosses using Penang Jewel, were made with an alba form.

Side Note: Tying into section 5 below, we were discussing this in theHybridizersForum.com and another breeder reminded me that he is trying to get some blue genetics into the crosses as early as possible. Thinking that direction it's very likely that I will take these crosses, put them on a white like aphrodite and then go back to blue. With this approach I will accomplish basically the same goal as what is outlined in section 5, but I won't have to take the time to make all of those crosses. Jennifer Palermo and Penang Violacea made with an indigo violacea would be used.

I have two reasons for doing all of this. I believe tetrapsis will impart additional vigor and a tendency to bloom through out the year. It may just result in light blues. But I'm not completely against that either as long as they are more vigorous than the current coerulea phals. Also micholitzii's short stems just might balance out pulcherrima's long stems and it does tend to contribute better shape.

4.) Leverage 2N and 4N whites to improve shape - this is going to be a very long term work in progress.

a.) Coerulea lines need to be converted to 4N in order to do good 4N breeding. Many of us have already started on this.
b.) 4N crosses with standard whites will be done once confirmed tetraploids are in place.
c.) Blue on existing 2N Whites- I'm current trying to get crosses to take on aphrodite along with a few other folks. Aphrodite x violacea is the main target. I currently have aphrodite x equestris var cyanochilus 'ABC' growing in the greenhouse/. I doubt if these will be blue, but will be interesting to see what happens.
d.) Custom whites for blue breeding - see next section.

5.) Create and use custom whites for blue breeding - The last resort approach. Again this goes back to that gut instinct. This is not based on science and is really just a theory/personal opinion. So don't take any of this as the truth, its just one thing rolling through my head and so I'm working on this direction as one part of my breeding program.

I have this feeling that a regular satin white like aphrodite is not going to carry blue as well as hoped. I believe other species can be introduced to increase our chances some. So I'm remaking some white crosses that are not currently available in order to create my own line of whites tailored to later breed with blues. If the straight blue on aphrodite crosses work, then this is a total waste of time. If they don't work or don't work as well as planned, then this could be worth the extra effort. So as I've said before, I prefer to hedge my bets and try a few things that go against current schools of thought.

The following crosses are planned:

In every case, aphrodite will be used as the pod parent to keep as much of its shape as possible. I've found photos of some of these crosses both ways and the crosses with aphrodite as the pod parent are superior in shape to the reverse cross. Once available, these whites would then be used with the best current blue phals.

Please keep in mind that all of this changes frequently. As new information is available, I'm am constantly adjusting my breeding program. So this information represents a snap shot of what I'm up to at this moment. During the time that I originally wrote this and now, I'm having second thoughts about even needing to deal with the section 5 part of this. So as I said, this is a living and constantly changing plan.

Keep and eye out for more updates and new crosses. As we start to bloom some of the current crosses out, we will start to release more of these. In many cases we don't get lots of seedlings and want to bloom some of them out to make sure we are able to select good cultivars for future breeding.